In this Wireless Philosophy video, Liang Zhou Koh talks about the false belief task, an experiment designed to test for our capacity to mindreading. 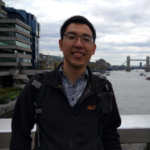