In this video, Julia Driver (Washington University in St. Louis) introduces us to the ethical theory of consequentialism. 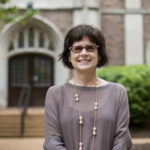 Professor of Philosophy at University of Texas at Austin

Julia Driver is Professor of Philosophy at University of Texas at Austin, starting in fall 2019. Beginning in fall 2020, she also will be the Darrell K. Royal Chair in Ethics and American Society. Prior to that, she was a Professor of Philosophy at Washington University in St. Louis. At the same Driver and fellow WUSTL philosopher Roy Sorenson were both hired by UT Austin, they were also named professorial fellows at University of St Andrews. She is the author of Uneasy Virtue, Consequentialism, and Ethics: The Fundamentals, as well as many articles in ethics and moral psychology. She is the leading proponent of a consequentialist approach to virtue theory. Before coming to Washington University, she taught at Dartmouth College, Virginia Tech, and Brooklyn College CUNY. She received her PhD from Johns Hopkins University in 1990, and her BA from the University of Texas at Austin in 1983.She has received a Laurance S. Rockefeller Fellowship from Princeton University, a Young Scholar's Award from Cornell University's Program on Ethics and Public Life, an NEH Fellowship, and an HLA Hart Fellowship at Oxford University. She chaired the American Philosophical Association's Committee on the Status and Future of the Profession from 2012-2015. In 2015, her book Consequentialism was translated by Iranian philosopher Shirzad Peik Herfeh into Persian.